It’s been ages since I last did a book tag, and since I feel like I’m rarely overly negative on here, I thought I’d go ahead and do the NOPE book tag, originally created by The Farah Project on Youtube. The tag is pretty straightforward; there are 16 questions centering around books and book related things that made you go NOPE. Though it’s quite unusual for me to outright hate books, I do go NOPE a lot, so without further ado, let’s get to it.

Okay, so we’re actually not off to a great start if my goal with this tag was to express negative opinions, but here we are. I promise I’m going to be angry soon, but for this question I’ve decided to pick the ending of Monsters of Men, the last book in the Chaos Walking trilogy by Patrick Ness (also known as one of my all time favourite authors).

Now, I’m not trying to pretend I didn’t freaking love this ending. I thought it was fantastic and I’ll probably never forget it. However, I read this book back in 2011 and I’m still in denial. I said NOPE for the last 30 pages of the book and haven’t stopped for 8 years.

But it’s great, I promise.

(And okay yes, Allegiant really was an awful ending to the Divergent trilogy)

Though there are some annoying protagonists out there, I’m finding it difficult to remember anyone specific at the moment. You see, I usually tend to either love the main character, or completely forget about them, so although it’s very possible I’ve suppressed the memory of someone much more awful, I’m going to give the (dis)honor to Dara from The Kingdom of Copper by  S.A. Chakraborty.

I actually really liked Dara for the majority of the first book in the series, but in this one, I really couldn’t care less about him. He was boring, annoying, and infuriating, and if he disappeared under mysterious circumstances I’d be like good riddance. This might very well change when I pick up the conclusion this summer, but right now Dara is on my shit list.

“You have no honor.”

— The Kingdom of Copper 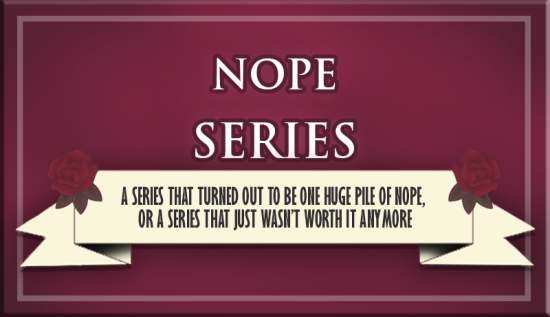 Admittedly, I didn’t invest that much time on this series since I stopped after the second book, but I’m picking Throne of Glass for this question. No, I didn’t hate either of the books I did read, but by the time Heir of Fire came along, I just couldn’t be bothered anymore and over the years I’ve grown more and more tired simply from hearing about it.

I know that there are quite a few of people out there who ship Kavinsky and Ronan from The Raven Cycle, and I simply can’t agree with that. I mean, you do you, but why ship Ronan with an abusive asshole when his literal soulmate is right there!?

“WAKE UP, FUCKWEASEL, IT’S YOUR GIRLFRIEND!”

I wasn’t a huge fan of the plot twist in Everything, Everything by Nicola Yoon, mostly because it felt to me like the most obvious route and I’m sorry, but I thought it was somewhat lazy. I know many people loved the plot twist in this one, though, so it’s possible I’m in the minority here. 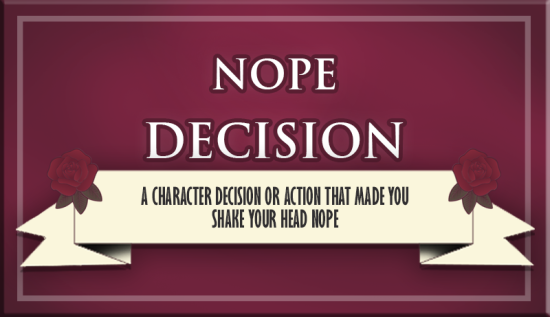 I’m just gonna leave this here: The Song of Achilles.

So many bad choices.

I love it though.

I mean, never say never, but I can’t really see myself picking up a genuine horror novel anytime soon. Not because it’s bad, but because I generally prefer not to be scared shitless, thankyouverymuch.

I very rarely (=never) buy paperbacks because I don’t like the look or durability of them, but that’s not usually a problem since most books are released in hardcover first anyway. Other than that I’m not particularly picky, and I can read paperbacks from the library, I just don’t like having them on my own bookshelf. 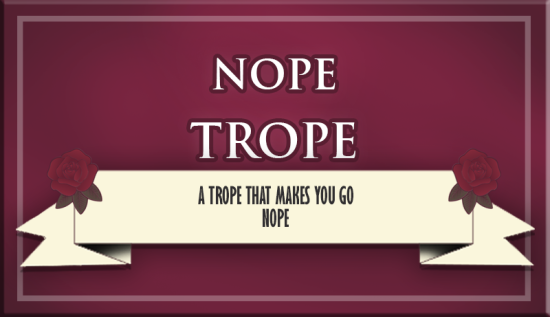 Wow there are so many to choose from! Lucky me!

A lot of people picked insta-love or love triangles for this question (both of which I agree are terrible), but I think I’m going to say girl-on-girl hate instead. I’m getting too old for girls hating on each other for no goddamn reason.

Other gems include, but are not limited to: miscommunication to the point of utter absurdity, douchebag love interests, mating bonds, and “We met in a previous life and are meant to be together.”

Okay, I wouldn’t necessarily say this book is that hyped or pushed at me, but I will never read The Cursed Child no matter how many times I hear about it.

I despise the x years later cheesy fluff epilogue with a burning passion. Look, I don’t need to know that the character’s lives turned out perfectly in every possible aspect, I just want a satisfying ending where things are somewhat decently tied up and makes sense.

Do I need to remind you of the time yoga vampire Matthew from A Discovery of Witches told his love interest that: “I will kill you myself before I let anyone hurt you.”

So yeah, there’s a lot to unpack there.

“It was comforting, if I overlooked the fact that he was holding me against my will.”

— A Discovery of Witches

As a general rule, I’d say all books deserve to exist no matter how terrible. However, do I wish I’d never read Sweet Temptation by Wendy Higgins? Yes.

Sweet Temptation is basically the entire original trilogy condensed into one book told from the PoV of the love interest, and it actually made me dislike the first three books more than I already did.

“My man parts are crying.”

This question was originally “A scary villain/antagonist you would hate to cross and would make you run in the opposite direction,” but I took the liberty of changing it because well, I wanted to.

And yes, I’m going to say it: I never cared one iota about Holland from A Darker Shade of Magic by V.E. Schwab. I just didn’t find him to be a particularly intriguing threat to the other characters, nor did I have any interest in learning more about him. Unfortunately.

The Winter of the Witch by Katherine Arden contains more than one death that actually caused me physical pain, so you can pick whichever you like.

— Me, reading The Winter of the Witch 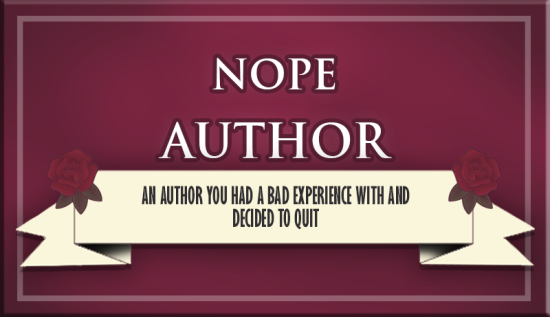 For this last one, I think I’m going with Margaret Rodgerson. Dont’ get me wrong, she hasn’t done anything horrific and I wouldn’t even say I hated her debut novel An Enchantment of Ravens, but I was just really underwhelmed and unimpressed. Sure, I might change my mind at some point, but right now I don’t really have any interest in picking up another one of her books. It just wasn’t for me.

And that, my friends, was all!

Do you agree with my choices or think I’m insane? Feel free to let me know down in the comments.

I had really fun doing this tag, and as per usual, I encourage you to try it out yourself.

3 thoughts on “The NOPE Book Tag”